Scoliosis is a common problem I see in patients as a Physical therapist.

Some people experience pain early in life whereas others don’t have pain until later in life. The symptoms can be reduced and the muscle imbalances can be worked on with exercise. 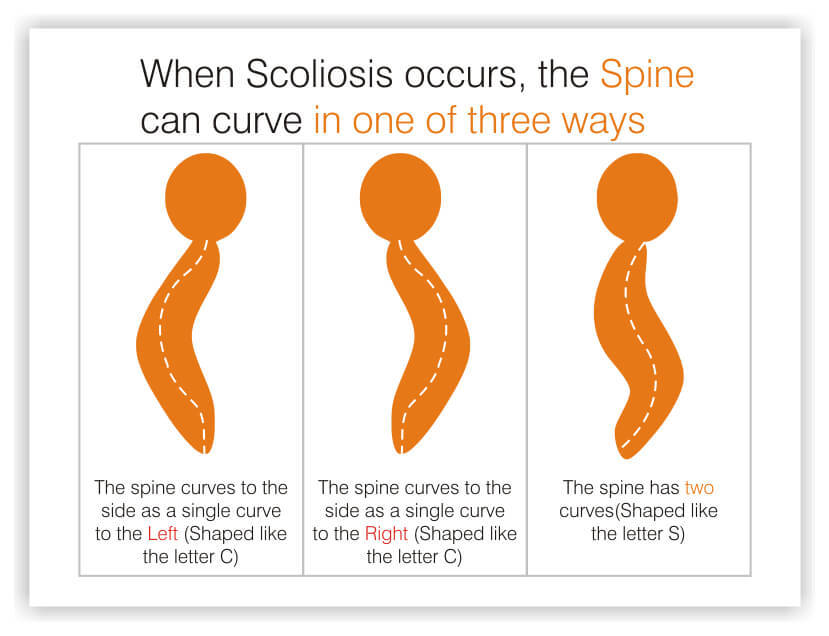 So let’s take a look at what scoliosis is. It comes from the Green word “skoi” which means twists and turns. Someone can be diagnosed with it if they have greater than 10 degrees of curvature (any over 40 degrees is considered major). The curve varies: it can be a C-curve or an S-curve in the thoracic/lumbar region of the spine (see picture above). Usually a slight hump develops on the convex side of the curve. Causes are usually idiopathic (no cause) or structural and usually develop near puberty. Don’t you remember getting checked for it in middle school?

Scoliosis involves asymmetrical muscles or muscle imbalances. Often times, what may happen is the lower back muscles pull the lower ribs which results in rotation and bending of the spine. So what does the mid-back do to compensate? It rotates and bends the opposite way. Then your neck does the same… what a copycat! So as a result of your muscles, your spine could compensate three times resulting in that fancy curvature we call Scoliosis. 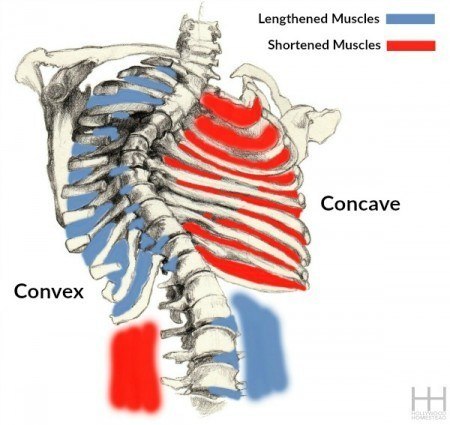 But that’s not all; Scoliosis not only affects the lower back up to the neck. It also affects the lower back down to the feet. The pelvis likes to raise on one side and as a result, one leg may appear longer than the other. In a way, it’s sweet of your body to compensate in an effort to fix you. But the reality is, it’s doing more harm than good.

As a result of the spine curvature:

The sagittal plane divides the body into left and right halves for flexion/extension movements.

The frontal plane divides the body into front and back halves for lateral movements like a jumping jack.

The transverse plane divides the body into top and bottom halves for rotational movements. 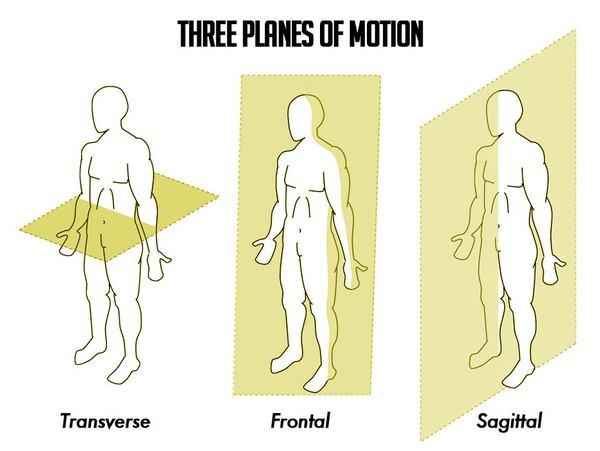 Left uncorrected, the scoliosis curvature can worsen over time. However with treatment, the progression can be slowed down. The younger you are when treatment is started, the better the results. Treatment may involve things like surgery or braces but the most conservative treatment is obviously exercise.

According to Schroth, a scoliosis professional, treatment exercises should involve a combination of stretching, strengthening, and breathing practice. These techniques halt the progression of the curvature and therefore can help reduce pain and/or breathing difficulties.

Scoliosis stretching and strengthening exercises may be done at home or within a Pilates class (a wonderful form of exercise for scoliosis). Your muscles should be strengthened on both sides in order to improve spinal alignment and posture.

A common question I get is whether yoga is good for scoliosis. The answer is, yes and no. Certain exercises are beneficial however certain are not. Scoliosis yoga exercises to avoid are: excessive back extension, back side bending, and twisting/rotation. In yoga, many of the exercises involve excessive back extension (i.e. backbends) and twists. Also the headstand is not great for scoliosis. So if you decide to practice yoga, you will have to make modifications.

Breathing should also be practiced since spine curvature causes the pulmonary cavity to narrow on one side (leaving less space for the lungs to expand). A common technique for scoliosis breathing is called Rotational angular breathing (RAB). It involves learning how to force inhaled air into the narrow side of the torso. So if you have a left-sided curve and a left rib hump, your left torso has more space than the right. So upon inhaling, you should actively try to inhale more air into the right side than the left. These breathing exercises should be practiced during the scoliosis strengthening exercises demonstrated below.

The goals are to gently stretch, strengthen, and improve posture. To restore symmetry, a focus is placed on asymmetrical exercises.

The first program is for beginners and even seniors could do it!

The second program involves more advanced exercises that may involve equipment. For both programs, incorporate breathing techniques by inhaling into the narrower side to prepare and then exhaling during the action or movement of the exercise. 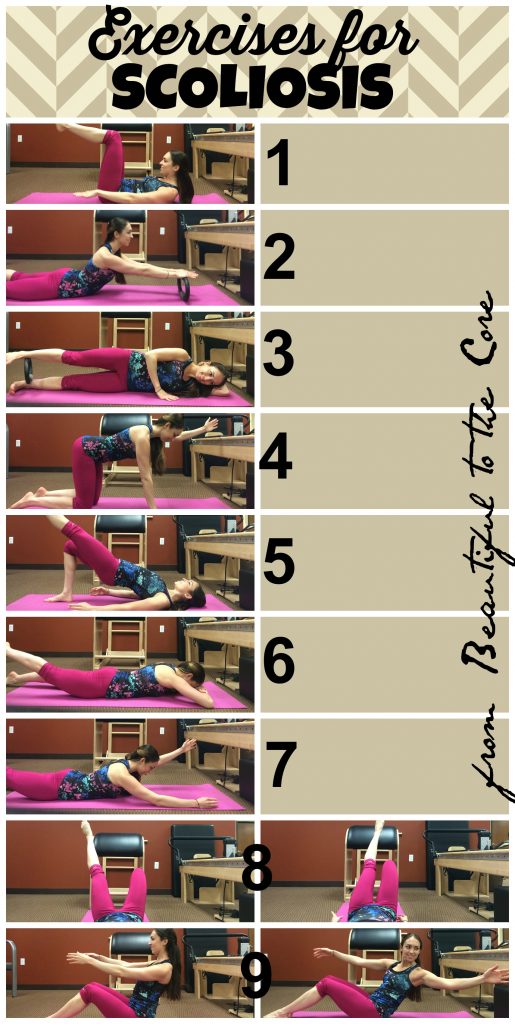 1) Single Arm Hundreds- Lie on your back, crunch up, pulse one arm 100x before relaxing. Repeat on other arm.

2) Ring Swan Presses- Lie on your stomach with your arms out front on top of a ring, press your upper body up slightly (but keep this minimal as we want to avoid excessive spine extension), then lower. (Can be done without a ring, hands on the mat)

3) Sidelying Ring squeezes- Lie on your side with the ring between your ankles, squeeze the top leg down for 5 seconds and then relax. Perform on both sides. (without a ring? you can use a small ball or a pillow instead!)

4) Quadruped Single Arm Raise- Start on your hands and knees, then slowly lift one arm forward in line with your body, then lower. Repeat on other arm.

5) Single Leg Bridge- Lie on your back with one foot on the ground and the other leg in the air, then lift both hips up to the ceiling, keeping the hips level.

6) Face Down Single Leg Raise- Lie on your stomach and slowly lift one leg up, keeping that leg straight. Repeat on other leg.

7) Swimming opp arm/leg Raise- Lie on your stomach, then lift one arm and the opposite leg up. Lower and repeat on opposite sides.

8) Single Leg Circles- Lie on your back with one foot on the ground and the other leg in the air. Keep the leg in the air straight and make a small circle (basketball size). Then repeat on other leg.

9) Half Roll Back with Twist- Sit with arms reaching forward. Then roll halfway back as you open one arm out to the side. Then sit back up to the center. Repeat on other side. This is a small amount of rotation (about 45 degrees) so it is safe to do.

*Many of the above exercises are performed as if I were to have a left-sided scoliosis (right shoulder lower, right hip higher, left rib hump, right spine shortened, left spine elongated, right leg longer). If you have a right-sided scoliosis then modify accordingly by doing the opposite of my demonstrations.*

If you are someone who would benefit from a customized gym training program, take a look at our 1-on-1 coaching services. We can write you a custom program keeping scoliosis in mind.

How to take body circumference measurements

How to take body circumference measurements 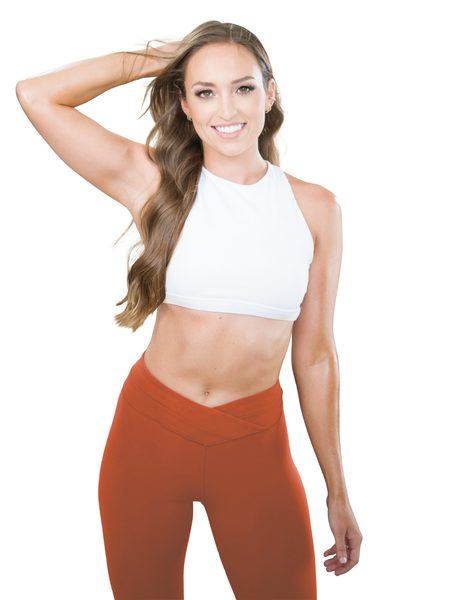 find what you're looking for 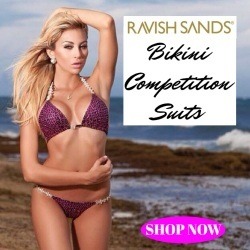 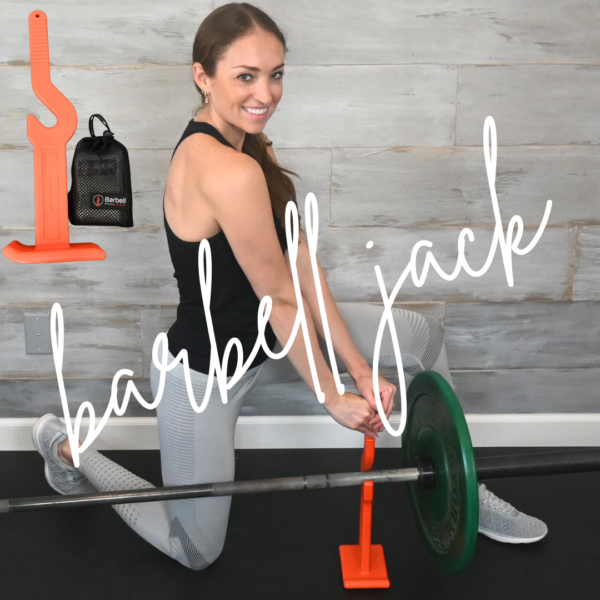 Click above to get your Barbell Jack for 10% off using code: steph10%

Please log in again. The login page will open in a new tab. After logging in you can close it and return to this page.